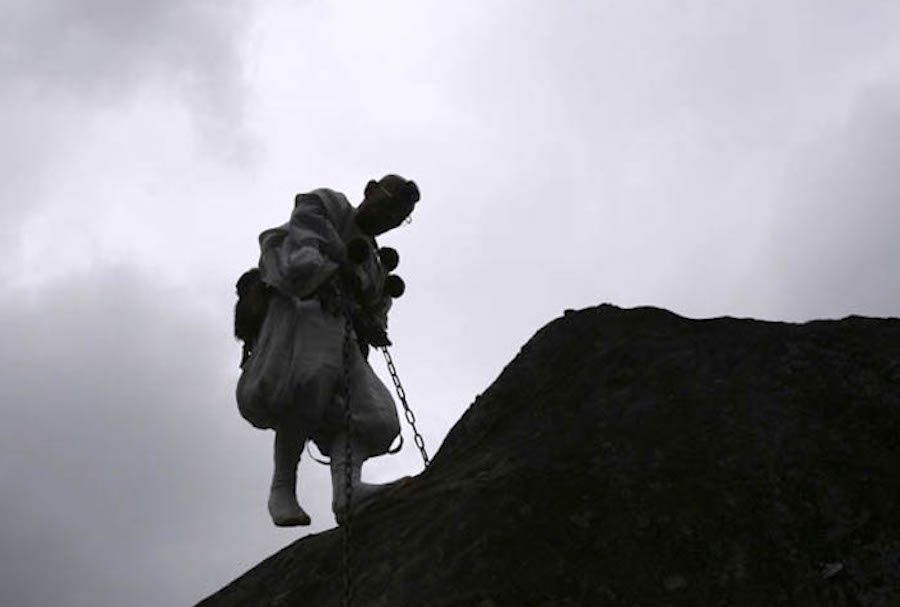 Shugendo, can be translated into “The way of Mastering the Force”, is a form of religion which requires a harsh and beyond imagination training and discipline. Nowadays, not just Buddhist monks and Shrine priests but many laymen or even people beyond their beliefs practice the Shugendo to seek the enlightenment. What really is Shugendo?

The Shugendo is a unique religious form, which aims to achieve various powers to help oneself and others. Originally based on the native beliefs of ancient Shinto, elements of Esoteric Buddhism, Taoism, and other thoughts interweaved into the Shugendo.

The practitioners are called “Shugenja” or “Yamabushi” who put on a garment called “Suzukake” and a white Buddhist stole both made of linen. They also put on a black small box-like hat and have a staff made of metal.

In addition to that, they have a conch shell to communicate with each other in the mountains. The Tengu or Karasu Tengu, Japanese mountain ghosts are said to wear the same garment with Shugenha.

Their ultimate goal is to attain Buddhahood during life.

Most of the mountains they come to practice are mountains, which are assumed to be “the outer world”, where general people never approach. Therefore, it’s believed Shugenja or Yamabushi practice and absorb the sacred air and achieve the spiritual power.

They work like a bridge between the sacred and the secular world and share their spiritual power with worldly people.

From ancient times, Japanese has been believed that the mountains were sacred and once one enters there, which meant they entered the world of Kami (deities) and ghosts.

The legendary holy man, En no Gyoja, was a mountain ascetic (Yamabushi) of the late 7th century. He is widely considered to be the founder of the Shugendo.

En no Ozunu (his real name) was a diviner at Mt. Katsuragi on the border between Nara and Osaka. He is said to possess magical powers, flew freely in the sky and raced around the mountains.

People assumed him, he set demons to work for him even.

The legend tells those demons used to only bad before they met En no Gyoja. He hid their children and let them know the heartache and pain themselves. After that, they changed their hearts and became his disciples.

The time En no Ozunu felt his imminent death was approaching, they begged to come with him. He said never to them and taught them to stay alive as long as they can and take care of the people who want to practice the Shugendo.

They made their children to open the guesthouses for the practitioners and one of them run by the Gokijo family is still open today after 1300 years.

Noh Josen and the Legend

However, there was a man named Noh Josen, a son of the late 6th-century Emperor Sushun, who is considered to be the originator of the Shugendo before En no Gyoja, so it’s called the Ancient Shugendo.

He practiced in the Dewa mountains and helped people.

Despite the fact that Noh Josen was from the Imperial family, the son of Emperor Sushun named Prince Hachiko, why he had to flee to the Dewa Sanzan (three mountains)?

The legend tells that Shotoku Prince, the cousin, let him escape when his father Emperor Sushun was assassinated by Soga no Umako in 592, the head of the powerful clan.

After he came to Haguro, one of the Dewa Sanzan (three mountains0, he became a wandering hermit of the mountains and established the ancient Shugendo.

In the Kamakura and the Muromachi period (1192-1573), the Shugendo was most flourished. It’s interesting to note that Samurai pursues Bushido to keep one’s virtues at a bay and sought for the meditative moments such as tea ceremony offered.

The Edo period and After

The strictness in the training has been diminished. However, still, people are joining the training and living on its thoughts seek for the enlightenment.

The practitioners perform; fasting, standing under the waterfall, walking over the fire, Zen sitting meditation, being smoked.

Who becomes Yamabushi? Not only Buddhist monks or Shinto priests practice Shugendo, but also the laymen Buddhists organize the religious association and practice when they are off from their secular job.

Most of the religious association belongs to the Daigo-ji Temple of Shingo Buddhism or Seigo-in Temple of Tendai Buddhism.

The Practice of Misogi

The term “Misogi” means to clean oneself, the exact concept is seen in ancient Shinto, which puts a tremendous importance in keeping oneself clean. It’s an exercise designed to rinse out the body and mind to stay clean physically and spiritually.

Originally in ancient Shinto, rinse out one’s body in the sea was the norm, however, practitioners often gathered around a sacred waterfall and perform a series of prayers and set of calisthenic exercises.

The followers go after them and do specialized breathing pattern and chant the Shinto prayers, the mantra of Esoteric Buddhism, and sutras.

The Practice of “Nishi no Nozoki”

The above picture shows the practice of “Nishi no Nozoki” (gaze at the West), practitioners are tied up with straw rope and suspended over the edge of a cliff, face down to have a glimpse of the Buddhist world.

As you can see the picture above, one practices this test putting his life at the risk. It aims to lose a doubt and acquire the Buddha-nature. Often asked questions to make a commitment.

The benefits of meditation are widely known by everyone today, there are numerous methods to reap the benefits. In the Shugendo, the pieces of training themselves are the meditation.

Train one’s body in the mountains let practitioners forget their daily chores or worries, but to focus on their physical. What’s difficult about meditation could be one cannot just stop thinking.

The training can stop one from thinking, the harder the better.

In the Shugendo, burning pieces of wood and putting the offering on the altar to invoke divine help and pray.

Those qualities are wonderful in their own rights. However, how does one can feel and achieve after the real pieces of training?

The Buddhist monk, Ryojun Shionuma, achieved a number of Shugendo training in 1999 which is called “The Ultimates”. Only two completed this austere ascetic practice at Mt. Kinpusen in 1300 years.

One keeps on walking in the rugged and steep mountains for 1000 days. Dropping out of the practice is not an option once one begins, if one decides to stop, he has to kill himself.

They carry a dagger for this reason. Once you commit, there’s no turning back even if one gets sick, hurt, or a storm. This is not because they take lives lightly, but they put the great importance of the determination.

The magical powers you can get from the training may not be about flying freely in the sky, but about gaining the power of self-control in a practical sense.

Ryojun, a high-rank monk, says what he gained after he completed the practice is the essential thing. He came to realize how much it is precious to exchange a simple word of appreciation or greetings.

The professional Japanese free diver, Ryuzo Shinomiya who dives 377 feet says “In order to control one’s mind, one has to work on his body first.”

The Shugendo is one approach to feel the unity with nature and a way to tame one’s mind by taking a physical enduarance. Here you would find one of the great meditation methods.

Japanese Buddhism #1: For the Elites and the State