What each Shrine Means/ Types of Shinto Shrines

We have more than 80,000 Shinto Shrines in Japan which means you hit the shrine every corner you go. Even not every Japanese understand the differences among many types of Shinto shrines.

The Grand Head Shrine: Fushimi Inari Taisha in Kyoto
The Enshrined Deity: Uka-no-Mitama-no-Kami (宇迦之御魂神)
The Blessings: It is the god of grain and one of the gods of agriculture. Also, it’s famous as a god of prosperity due to its bountiful image.

You can find these shrines in the stores and shopping districts, on the rooftop of companies and on premises of factories.

The term “Inari” can be brake down to ‘Ine’ and ‘Nari’ which means producing rice. The fact that one single grain of rice can yield thousands of them related to thriving business and encouragement of new industry. Hence people worship it as the deity of that domain.

They feature fox guardians which stand out and tell us they are one of Inari shrines. Why fox? It’s because foxes prey on mice which eat away grains and their fur color and the shape of the tails look like the ear of rice. Those facts made foxes related to the divine messengers or guardians.

Inari shrines are most common types of Shinto shrines and we have approximately 30,000 shrines all over Japan.

The Grand Head Shrine: Usa Jingu in Oita Prefecture
The Enshrined Deity: Hachiman (Deified Emperor Oujin) as the Deity of Agriculture and the Sea. Also, Empress Jingu is Enshrined as well.

The Iwashimizu Hachimangu was constructed as a guardian deity of Heian-Kyo (present-day Kyoto).

In the Kamakura period (1185-1333), Minamoto no Yoritomo constructed Tsuruoka Hachimangu as the deity of military and protection. Since then, the worship of the deity of Hachiman spread all over Japan.

This types of Shinto shrines exist a lot, approximately we have 14,800 Hachiman Shrines all over Japan.

The Grand Head Shrine: Ise Jingu (Jinku) in Mie Prefecture
The Enshrined Deity: Amaterasu
The Blessings: Its benefits are not specific, but universal, and it is also known as the god of national peace and prosperity.

It has its alternate name ‘Oise-san’. Also known as Kotai shrine or Tenso shrine.

It refers to the worship of Ise Jingu. Since it enshrines Amaterasu, the sun goddess, the worship widespread with the agricultural rituals.

There are about 5,400 Shinmei Shrines all over Japan.

Tenjin or Tenmangu is the abbreviation of Tenman Dai-Jizai Tenjin.

The Grand Head Shrine: Kitano Tenmangu
The Enshrined Deity: Sugawara-no-Michizane
The Blessings: Widely known as the god of learning, sincerity, and protection from bad luck.

Sugawara no Michizane was the exceptional scholar and politician of the Heian period (794-1185). He was stepping the ladder under Emperor Uda and Emperor Daigo. However, his political opponent tricked him into a demotion.

There’s the Onryo belief in Japan, the soul of one who dies indignantly could cause a lot of troubles and disaster to those who are alive. So people enshrine him to calm his spirit not to cause any disaster.

People began to call him ‘Tenjin-sama’ and expect the divine blessings from him on the field of study and exams.

Dazaifu Tenmangu is another famous Tenjin of all where you see the crowds of students each exam season.

Suwa-jinja Shrine is a Shinto shrine that received the deity’s invocation (transferring the spirit of the deity to another location and enshrining it) from Suwa-taisha Shrine located on both sides of Lake Suwa in Nagano Prefecture.

Famous as a god of strength and one of the three military gods of Japan.

There are about 5,700 Suwa Shrines all over Japan.

The Grand Head Shrine: Sanzan (Kumano Hongu Taisha, Kumano Hayatama Taisha, and Kumano Nachi Taisha)
The Enshrined Deity: Izanami no Mikoto and others.
The Blessings: It is essentially a Buddhist Buddha, but its temporary form is a Shinto deity, a rare form of god.

There are about 4,776 Kumano Shrines all over Japan.

In 710, when the capital was moved to Heijo-kyo in Nara, Fujiwara no Fuhito moved the Fujiwara’s clan deity, Takemikazuchi, to Mikasayama in Kasuga and enshrined him, calling him Kasuga-no-kami.

Yasaka Shrine is the name of a shrine dedicated to Susanono-no-mikoto and is located throughout Japan.

At the beginning of the Heian period (794-1185), the people of the time believed that the outbreak of plague and disease in the capital was caused by grudge spirits (people who had lost political power and were exiled or executed), and enshrined their spirits.

However, the anger did not abate, and the people demanded a stronger god or Buddha. The origin of the shrine is the worship of Susanoo-no-mikoto, who have defeated the Yamata-no-orochi, a serpent equated with all kinds of disasters in Japanese mythology, and saved Kushinadahime-no-mikoto, bringing good fortune to the land.

Hence, it is known as the god of calming calamities.

It is beneficial for warding off bad luck and preventing calamities. Additionally, people worship them as the god of safe navigation, agricultural protection and sumo wrestling.

Approximately 2,100 shrines exist all over Japan.

Hiyoshi Shrine and Sanno Shrine are shrines based on the Sanno faith, and were transferred by Hiyoshi Taisha Shrine.

Sanno refers to the divine spirit that protects the sacred mountain, in this case, Oyamakui, the deity of the landowner of Mt. Hiei.

With the relocation of the capital in Kyoto, people began to revere the shrine warding off evil and misfortune, as it was located in the demon’s gate of Kyoto.

Approximately 2,000 shrines exist all across Japan.

The Konpira Shrine was originally dedicated to the deity Zotousan, where it is located.
Since Mt. Zotou has long been considered a navigational objective in the Seto Inland Sea, people began to worship deity of Mt. Zotou as the god of navigational safety. Also, farmers revered it as a god for rain.

Approximately 1,900 shrines exist all over Japan.

Ebisujin was originally a god of the sea, and was born from the custom of calling unfamiliar objects that washed ashore ‘Ebisu’ and enshrining them as a gift from the gods to the sea.

It has become a god of good catches and, by extension, of prosperous business.

Approximately 1,500 shrines exists all over Japan. 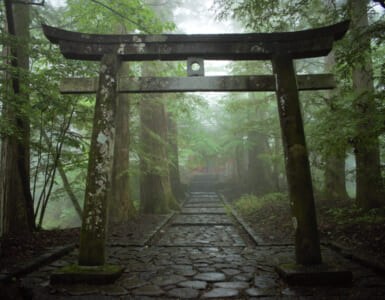