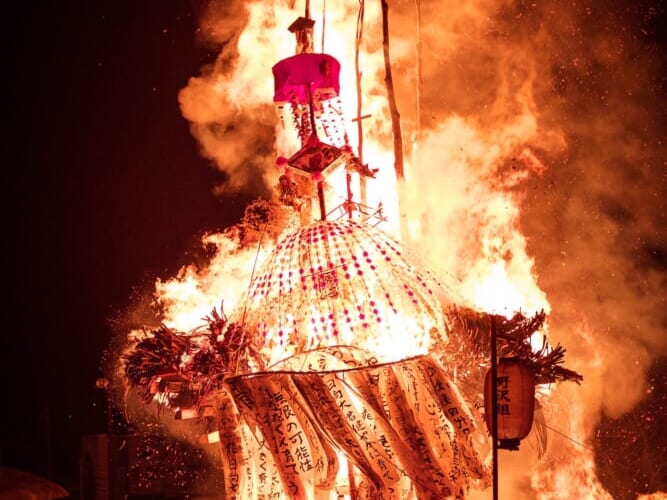 Shinto rituals have survived in close connection with the lives of the Japanese people. It is strongly reflected in modern Japanese people’s lives and daily activities. Japanese people have passed down these behaviors to the present day as customs rather than as religious rituals. I would like to introduce some of these practices, life events celebrations, and rituals in this article.

Drinking Otoso on the morning of New Year’s Day

On the morning of New Year’s Day, it used to be customary to drink Otoso while offering it to the gods and chanting and praying for the health of the family.

The otoso is made of six kinds of herbal medicines and has the function of warming the body and regulating digestive functions. It also had the effect of preventing illnesses that are more likely to occur during the cold season.

Kadomatsu, a traditional Shinto custom, was placed at the gate of a house as a marker to welcome the god of the year into the house on New Year’s. The kadomatsu is made of pine, bamboo, and plum, all of which are auspicious plants.

In the old days, a pine tree with roots was planted in front of the gate.

For boys, people gift hamayumi (ceremonial bow to ward off evil), and for girls, they give hagoita (a battledore). Parents display these gifts with the wish that the baby would grow up in good health.

Setsubun (the day before the beginning of spring): Shinto Rituals

In the old days, the villagers were afraid of an ogre that lived deep in the mountains. The villagers threw roasted beans at the ogres to drive them away.

We can divide Japan’s climate roughly into four seasons, and people have held festivals in accordance with these four seasons since ancient times.

From the beginning of the year to spring, people hold festivals to pray for good fortune in the coming year.

In autumn, people have harvest festivals to give thanks for the harvest. As described above, the Japanese have cherished spring and autumn festivals since time immemorial.

Summer festivals, on the other hand, have a short history. Since the Middle Ages, with the development of cities, festivals for the purpose of preventing epidemics became connected with water festivals in rural areas, and people came to like it.

Winter is also the season of kagura. Kagura refers to the repose of souls accompanied by dance. In ancient times, Japanese people called it “kami play”, too.

The Boys’ Festival, the custom of bathing in iris baths on May 5. In the old calendar, this was the beginning of the rainy season, when various diseases were likely to occur due to the humidity.

Therefore, people began to take shobu-yu (iris bath) to avoid getting sick. The strong fragrance of the iris is said to purify the body of evil spirits and warm the body.

This effect spread among the common people as an amulet to ward off evil spirits, and the practice became widespread.

The custom is to view the moon on August 15 of the lunar calendar, which is now mid-September. This custom was to enjoy watching the moon with sake and Dango (rice dumplings) on the porch.

In the Heian period (794-1185), there was a custom of preparing sweet potatoes, which was called “Mid-Autumn Meigetsu. This was a deeply religious event that expressed feelings toward the gods of agriculture during this season of harvesting.

Mid-Autumn Meigetsu was a pious event to express gratitude to the god of agriculture during this harvest season.

Some consider that Japanese people first started using chopsticks in the Nara period (710-794). The Kojiki (Records of Ancient Matters) also records that chopsticks have been in use since the age of gods.

Japan is a country with a culture that was formed from the unique customs and dietary habits of ancient times, where people used chopsticks instead of grabbing food directly with their hands.

Shinto or Shinto shrines are involved throughout the lives of Japanese people.

The life celebrations and rituals I am about to introduce are mainly performed at shrines, making shrines indispensable to the Japanese people throughout their lives.

To thank the gods for the baby’s safe birth, make offerings of sekihan (red rice) and other foods, and pray for healthy growth.

It is customary to name the baby on the seventh day after birth. The naming certificate is hung on the altar to inform the gods and pray for the baby’s safe growth.

First visit to the shrine

A ceremony in which rice and sea bream are prepared and served to the infant at 100 to 120 days of age. People also call it “The First Chopsticks Ceremony”.

On November 15, three-year-old boys and girls, five-year-old boys, and seven-year-old girls purify their bodies, put on formal kimonos, and visit a shrine with their parents.

They thank God for their healthy growth.

On January 15 in the city where both men and women turn 20 years old, they report and pray that they will contribute to the nation and society as new adults.

Marriage, in which people meet and form a bond, has also been thought to be powered by the gods. In ancient times, marriage ceremonies were held in front of a deity enshrined in an alcove at home, and the couple exchanged sake cups.

Since the Meiji era (1868-1912), weddings have been held at shrines. Now, many couples hold the ceremony at wedding halls in western style.

A bad year refers to an age when all kinds of calamities are likely to befall a person. People who have reached the age of misfortune perform an exorcism to receive blessings from the gods and escape from misfortune.

The following is a sampling of some of the various types of rituals.

Fortune-telling for the year

Divination rituals to predict the good or bad of the year, the crop, the abundance or bad of both crops, and the monthly weather. World affairs rituals, water festivals, porridge divination, etc.

Ceremonies to exorcize evil spirits, to get rid of the plague, to welcome the New Year, etc. Horafuki rituals, Oniyarai, Setsubun, etc.

The “Chinowa Ritual” originating from the Somin Shorai is held to ensure the safe passage of the summer season. Nagoshi-no-harae (purification rites over the summer), ring-going-through ceremony, Kusa-matsuri (grass festival), etc.

Often related to the belief in the spirit of the gods and the god of misfortune. Shakushi Matsuri, Tenjin Matsuri, Gion Matsuri, etc.

A ritual in which boiling water from a kettle is sprinkled with bamboo branches for purification and divination. Yudate, Yudate Kagura, etc.

A ritual in which a horse is ridden and a target is shot with a bow to divine the year, etc.

Rituals that are performed without speaking at all.

Rituals of agriculture, such as rituals for divination of the harvest of crops. Sumo wrestling by one person, etc.

A kind of festival held on the occasion of annual events, etc. Pounding rice cakes, etc.

The deity worshiped is often the local deity of the village or a rain god such as the dragon god. Rain-making festivals, Sengan burning, etc.