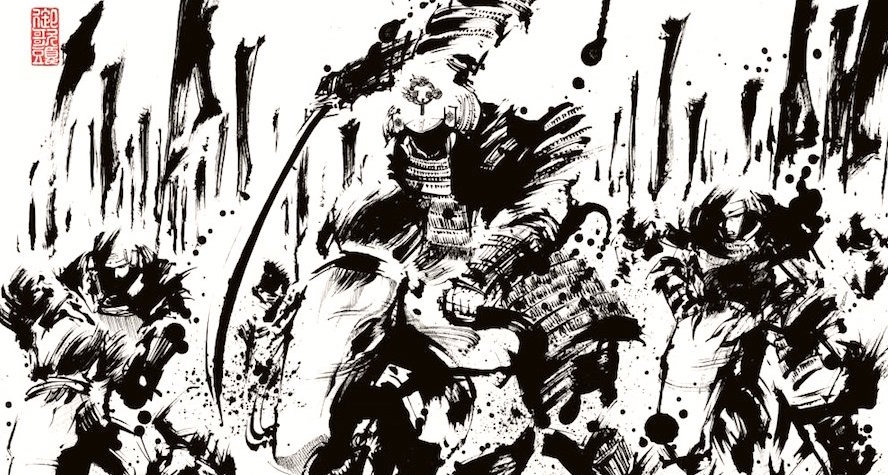 Soma Yoshitane is the lord of Soma Nakamura domain in Eastern part of present Fukushima Prefecture. His intelligence, proud, and patience kept the Soma domain alive.

Soma Yoshitane was born in the Odaka castle in 1548 and became the 16th head of Soma clan. He has its roots from the line of the Chiba clan of Taira family (Kanmu Heishi) which originated from Emperor Kanmu, who moved the capital to the Heian (present Kyoto) in 781.

He passed away in the Soma Castle in 1635. Among all other lords of the Soma domain, he is well-known for his intelligence that weathered and got over crises for numerous times for the domain.

The Origin of Soma Nakamura Domain

Although the Soma clan is thought to be descended from Taira no Masakado who drew a line from Kanmu Heishi, the direct origin is Soma Morotsune in Shimousa no Kuni (present Chiba Prefecture).

Morotsune was the second son of Chibanosuke Tsunetane, who Minamoto no Yoritomo had a strong faith in. He joined the Genji forces along with his father Tsunetane and fought well in the battle of Oshu. As a result, the Shogunate acknowledged their inherited land and gave the land of Mutsu-no-Kuni Nametaka-gun as well.

Later, at the time of the fifth son, Tanemura’s reign, they were given more land on Nametaka-gun and in 1323, his son Shigetane went there along with Okada-shi, Daihisa-shi and established the Soma clan of Mutsu Province in 1326.

The Disturbance Period of Northern and Southern Courts

Shigetane joined the Hokucho (Northern Court) forces during the disturbance period of Northern and Southern Courts, got killed on the battlefield in Kamakura in 1336. However, his son Chikatane kept on supporting Northern Court and fought deadly battles against Southern Court which had bases in Utsumine and Ryozen.

After the civil war ended, he organized Iwaki Gogun Ikki (revolt) with peripheral domains such as Morone, Yoshima, Shirado, Iwaki, Naraha in order to counter against the Kamakura Shogunate in 1410.

Since 1540, Yoshitane succeeded to the domain from his father Moritane.

The Soma domain had numerous strife against the Date clan which shared the border and arbitration over and over again. During his reign, they had more than thirty conflicts.

The fate has its own way, his grandmother, his mother, and his wife came from the Date clan. Yoshitane is the one that famous lord, Date Masamune fought against for his first battle.

Their battle ended with the end of the warring states era but the moment before Yoshitane passed away, he ordered his men to bury him standing in the direction of the Date’s territory.

The Battle of Sekigahara

In the battle of Sekigahara in 1600, Tokugawa Ieyasu suspected his behavior and his land was confiscated, however, Yoshitane was forgiven and he was able to keep his lands in 1603.

They moved to the Odaka castle and in 1611, then, his first son Toshitane renovated Nakamura Castle in present Soma city.

Japanese Castle: Architecture for the Defense

Soma clan is one of the rare 9 clans that survived from the Kamakura period all through to the Meiji Restoration (1868) along with Nanbe-shi and Shimazu-shi.

The Soma Nakamura Castle is located in the west part of the central area of Soma city, sits on the east edge of the hill. The castle site is maintained as a park where you can train horses today.

It’s classified as the type of low mountain castles, Honmaru (the center of the castle) sits on the higher ground than others and it’s surrounded by a moat, then surrounded by a second bailey, and the third.

There is Soma Nakamura Shrine on Honmaru, a baseball ground and a shrine on Ninomaru, and some building lots on Sannomaru. The layout design can be clearly seen even today and you can see some horses taken care of at the west part of Ninomaru.

Kuyo-mon has a relation with Buddhist Myoken (deification of the North Dipper Seven Stars) worship. “Ku” means nine and “yo” means a shining stuff.

Soma clan is thought to be originated from the line of Chiba family of Kanmu Heishi. Chiba family’s crest “Tsuki ni Hoshi” is famous for its origin story of Myoken.

The legend tells when their ancestor Taira no Yoshibumi was in a tight corner when he raised an army together with Taira no Masakado, he saw a star fell over from the sky and it’s thought to energize him to win the battle.

So that Soma clan began to use “Kuyo” as a sideline of Chiba family.

This is another family crest of Soma clan. Morotsune, the 11th grandson of Masakado, began calling themselves
Soma clan using “Tsunagi-uma” crest.

As we can see in the wild horse chase festival, there’s a description of the wild horse in “Soma Koji Hiyoroku” (the old record of Soma). It requires several hefty men to catch a wild horse. Once taken, set a pole and tie the horse to it. The horse stamps and grinds its teeth, neighs loudly and tries hard to flee. Of a horse, it is brave.

We will introduce you the legend of the origin of “Tsunagi-uma”.

In the Edo period, the crest with a wild horse tied to the pole was believed to belong to Taira no Masakado. He raised an army to rebel against the Court in Kanto region, however, there are some theories he didn’t even try to raise a rebellion as he was not considered to be a rebel.

It is considered that the aristocrats in the Court lived in idleness, therefore, Masakado raised an army as a leader of the eastern part of Japan.

Hence that deities would accept its plan and gave him a black horse encouraging Masakado for his deed. However, this horse is no other ordinary horse, only Masakado was able to ride on him. So they tied the horse to a pole.

Here is another crest of Soma clan, Kikko-ni-Hanabishi. The legend tells they began using Kikko crest since they worshipped deities of Katori Jingu Shrine as its Ichinomiya (the most prestigious shrine in the area) of Shimousa no Kuni, where they originated from.

It’s used to be a military drill but now it became the popular summer event which attracts more than 20,000 people annually.

This festival shows their bravery to posterity and some say it’s the original form of “Tsunagi-uma”.

We can see the design of “Tsunagi-uma” crest on the decoration of the shrines that enshrine Taira no Masakado such as Tsukudo Shrine and Kanda Myojin Shrine both in Tokyo.

The last lord, Tomotane, became famous for internal troubles which caused a great flutter after the Meiji Restoration (1868).

The fuss was about his family forcibly confined him in a room and Nishigori Takekiyo, a feudal retainer of Soma Nakamura domain, who was being loyal went to law several times.

Later, this case became a precedent of legalizing confining a man in a room and affected the establishment of the law of watching a mental patient.

Traditionally, the head of Soma clan acts as a commander-in-chief in the wild horse chase festival, however, the son of the head takes that job lately (2015-).

Back in 2011, the area which the exact former Soma Nakamura Domain was hit by a disaster and large part of the beach area was destroyed by the tsunami.

A part of the disaster-hit area became off‐limits due to the accident of the Fukushima No. 1 nuclear power plant.

The former Soma Nakamura domain family and its relatives moved to Hokkaido for once, then moved to Kami-ishi Jinseki Kogen-cho in Hiroshima Prefecture in groups when Soma Yukitane stepped up to be the 34th head.

As their ancestors moved from Kanto area to Fukushima, they moved to other places to keep their DNA.