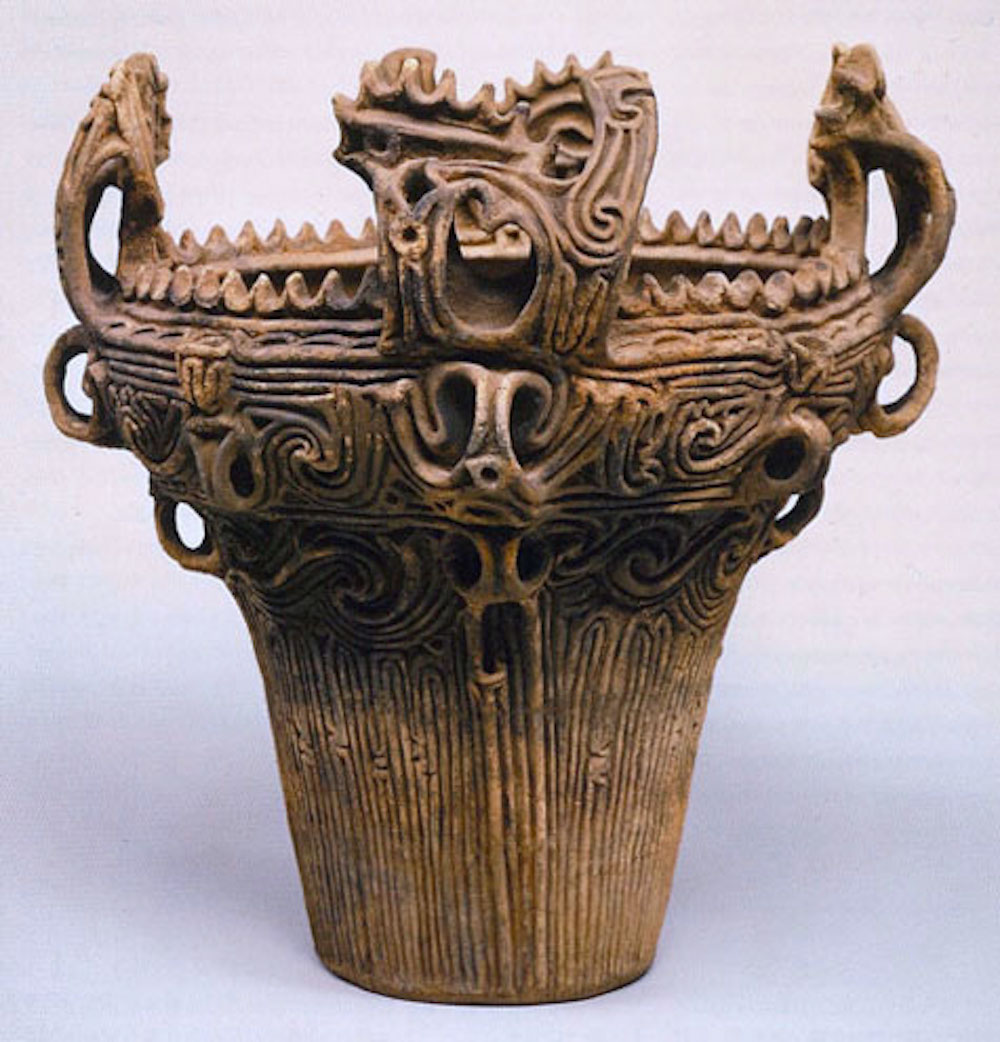 How Did Japanese Produce the Elaborate Handmade Pottery in the Ancient Time? – Jomon Pottery

Jomon Pottery – Ancient times of Japan, the Jomon period lasted from around 14,000 B.C.E. to 300 B.C.E. until the Yayoi period started. Japan produced numerous potteries which patterns are elaborate and mysterious. Let’s take a look at the types of Jomon pottery and what they used for, including the ones with mysterious flaming patterns!

The word Jomon means “straw-rope pattern,” typically used description for the style of pottery as we can see cord markings on those pots of the earliest Japanese period. The Jomon Period (14,000 B.C.E. – 300 B.C.E.), was named after the style.

All Jomon pottery was made by hand, without the aid of a wheel, the potter (mainly women in the early period) building up the vessel from the bottom with coil upon coil of soft clay. The clay was mixed with varieties of adhesive materials, including mica, lead, fibers, and crushed shells.

Types of Jomon Pottery and Its Uses

Jomon pottery had multiple uses. Its primary use was for storing food. In addition, they used pots for cooking since they had to remove bitterness to make nuts edible. The Jomon people, who dug pits to store things, including for to bury the dead.

However, scholars have discovered that pots were also used for storing corpses, such as that of infants.

Not all the Jomon Pottery has this elaborate flaming pattern. Most of the time, vessels, potteries were designed simply for practical use.

As if there were a mutation of the design, Jomon pottery which has flaming patterns appeared only for a short period of the Middle Jomon (around 4,700 B.C.E.- 3,700 B.C.E.).

The warming climate peaked in temperature during this era, increased population and production of handicrafts marked the high point of the Jomon culture.

It is a mysterious and powerful pattern, which wouldn’t influence the coming period’s pottery design.

Taro Okamoto, a Japanese artist, who was deeply struck by the mystery and beauty of Jomon Period artifacts, praised especially the flaming patterns highly.

He shared his enthusiasm for Jomon artifacts in his essay Thoughts on Jomon Earthenware which was published in the art magazine, Mizue in 1952. It is much more cubic and decorative compare to other period’s pottery.

There were carbide found inside the flaming pattern pottery, it’s believed that it’s used for cooking, but not for daily use. Researchers speculated it’d be used for some rituals and festivals.

Palaeoloxodon naumanni (extinct species of elephant), Giant Deer and so on. After those animals became instinct, sparse wood grew to be forest and people began to eat food from the forest.

Wild nuts and plants such as walnut, chestnut, acorn, and brake were the food Jomon people mainly ate.

While they stored nuts in earthenware, they hunt for bear, deer, wild boar, fox, rabbit, flying squirrel, pheasant and so on for animal protein.

Where close to the sea, they caught gray yellowtail, mullet, sardine, swordfish, tuna, herring and bonito. They processed those food to make it last longer.

Jomon people cooked kind like cookies with nuts. They ground nuts on a flat-surfaced plate (clay) with round stones, then added water and baked. Possibly they used yam to bind the dough.

Wild grapes, raspberries, and other wild fruits were discovered in many remains, which shows Jomon people made liquor out of them. Other than wild fruits, they used wild potatoes as well for making liquor.

Overall, Jomon people consumed various types of food. Excavation research shows there were no excess food storage, therefore no one accumulated the excess amount of food or power.

It is simply amazing they already enjoyed having cookies and the patterns they invented, which are truly inspirational to this day.