Japanese Family Crest – it is only for the Royal Family and the nobles in the western world, the family crest. However, in Japan, every family has its own crest which is called Kamon in Japanese. Its design is unique and sophisticated, and each has its meaning. We will take a look at Kamon’s history, some famous samurai family crests, and various scenes we see Kamon today.

Given the popular demand for searching family crests and roots, we have launched the Japanese Family Crest Consulting Service. 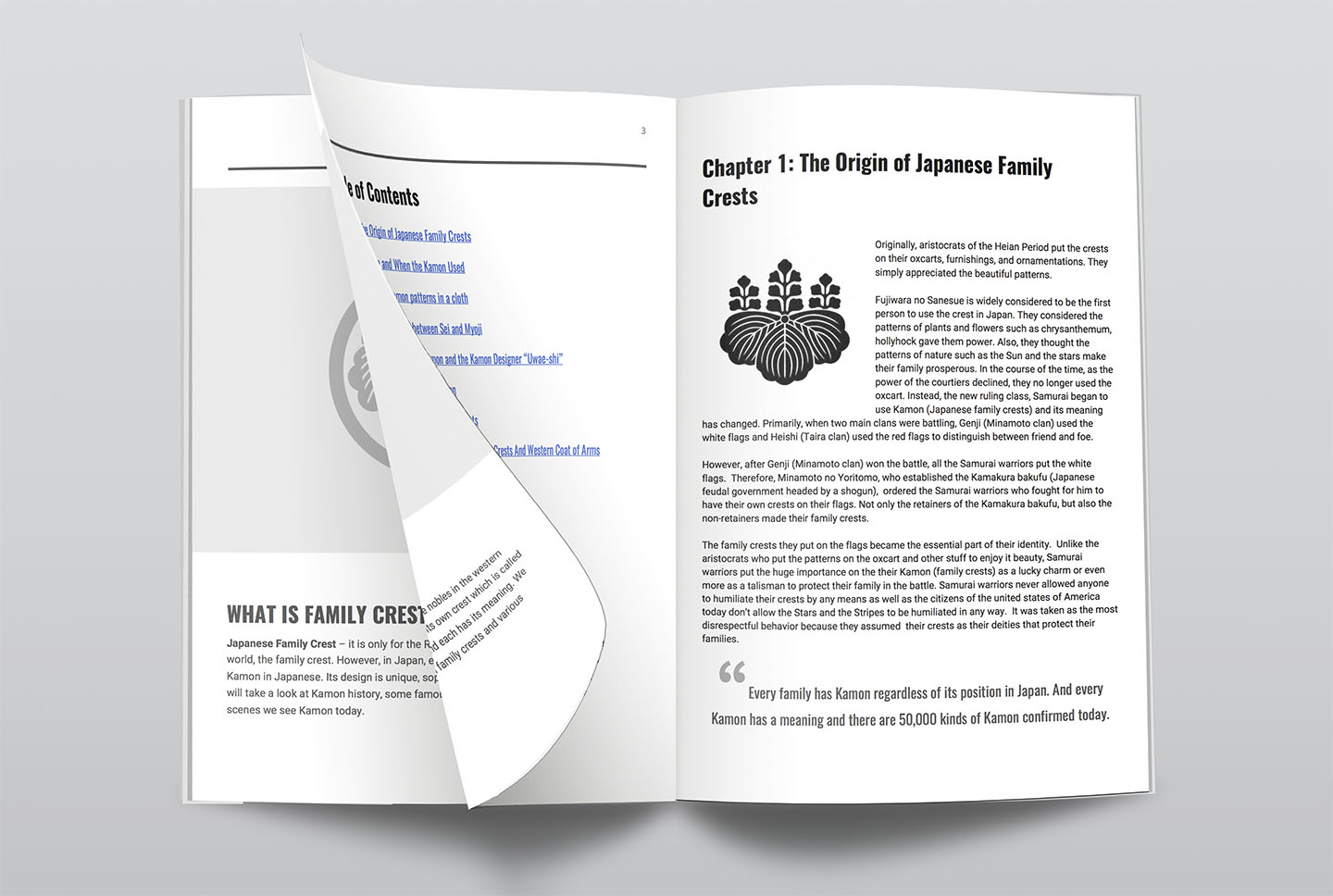 For those of you who have an interest in finding one’s Kamon and family roots, please take a look at Japanese Family Crest Consulting Service. (We no longer answer questions in the comment section.)

Check out our interview with Mosho Uwaeshi, the Japanese family crest artisans in Tokyo. You can create your own Kamon even if you don’t have Japanese Kamon yourself.
Kamon the Avant-garde: Interview with Japanese Family Crest Artisans

The nobles put beautiful patterns on various goods and they enjoyed its beauty. Gradually, they began to create their own family crest, Kamon.

People could distinguish which stuff belongs to whose family by the patterns of the crest.

In Europe, only the privileged classes were allowed to have the crest.

On the other hand, every family has Kamon regardless of its position in Japan. And every Kamon has a meaning and there are 5,116 kinds of Kamon confirmed today.

Around this time, the family crest was only for the nobles just like the western society.

However, Japanese entered the phase other classes began to use the family crest at the request of the period.

At the age of the civil wars, samurai began using Kamon as well.

It is a well-known fact that Genji and Heishi fought a furious battle at the end of the Heian period.

The Genji used white flags while Heishi adopted red flags to distinguish their own troops and the army.

Not just different colored flags, but samurai started to have their own crest.

In this era, to give rewards to samurai’s services on the battlefield accurately, they assigned some people to watch closely the battle.

Then, those people gave a report about who had done the most rewarding service.

In this job, you have to distinguish each party precisely and Kamon came in very handy for this reason.

The Edo administration ordered common people not to use a family name. For that reason, they needed Kamon to distinguish between their own family and others among the people.

So the number of Kamon increased exponentially.

In 1868, the class system was abolished by modernization, everybody was allowed to use a family name again.

However, the culture of Kamon has stayed alive to the present.

Oda Nobunaga was a powerful daimyo (feudal lord) in the late 16th century who attempted to unify Japan during the late Civil War era.

He is often regarded as ‘the first great unifier.’ Oda Family crest is ‘Mokko-mon’.

Actually, that is one of the main family crests Nobunaga had, he had 7 crests.

It is not very clear the origin of ‘Mokko-mon’, there are several theories like it’s a cross-section of a melon or some kind of flower.

It also resembles the shape of a bird’s nest with eggs in it looking from above, therefore this Kamon is used in hope of family prosperity.

The other six crests have their own meaning, here we take a look at characteristic ones out of six.

It is originally the Kamon of Heike, but Nobunaga insisted he was from Heike, so he used it.

Why he insisted on it because people believed the next conqueror would be someone from Heike, Nobunaga must have expressed his will through this Kamon.

Nobunaga used this Kamon on his flags. Eiraku Tsuho was a coin that was imported from Ming Dynasty.

It’s been circulated until the early period of Edo. Nobunaga was very active in working on economic policy.

Toyotomi Hideyoshi was a preeminent daimyo, warrior, general, samurai, and politician of the Civil War era who is regarded as Japan’s second ‘great unifier’.

Toyotomi Family uses ‘Kiri-mon’. Paulownia, which is “kiri” in Japanese, was believed to be the tree where a Chinese phoenix perches in ancient China myth.

Around 800, the Imperial Family of Japan began using Kiri-mon on their clothing.

Today’s Japanese government uses this Kiri-mon, also we can find it on the Japanese 500 yen coin.

From the Imperial Family to the Imperial Court, then the modern Japanese government, this Kamon has always been the symbol of high status.

Tokugawa Ieyasu was appointed to Shogun in A.D. 1603, and the Edo period began. Ieyasu was the third and the last ‘great unifier’.

It is originally from the Shin-mon (deity’s crest) of the Kamo shrine in Kyoto.

The Shinto priest in this shrine, Kamo, and groups of samurai in Mikawa had a close relationship. Ieyasu prohibited others to use this crest to keep its authority.

Perhaps you can see Kamon most at ceremonial occasions such as a wedding ceremony or a funeral.

You have a chance to see Kamon more often when you are in Kyoto.

Stores like restaurants and confectionery shop which has been in business for many years, some of them are even more than 100 years have their own Kamon.

Usually, they put it on their curtain at the entrance which is called “Noren” and their wrapping paper.

We see Kamon on wrapping cloth, too. Wrapping cloth can be used in a versatile way. It can wrap fruit to wine bottles in it and still looks stylish and easy to carry.

“Tenugui” is the cheapest and most handy washing cloth you can own with Kamon on it.

Also, you can see Kamon on a necktie, an umbrella, and roof tile. It represents a certain family today as well.

But people enjoy having their favorite samurai family crest on a key holder as such. Sophisticated designs are inspirational and make everyday life feel special.

A sure way to see a lot of varieties of Kamon at one time is you go to a cemetery and you’ll find them on the tombstones.

The shrines and the temples have their crest, too.

The Shrine’s crest is called ‘Shin-mon’ as we have seen with Kamo Shrine, the temple’s called ‘Jin-mon’.

Often times Shin-mon’s and Jin-mon’s patterns are derived from their deity’s origin and tools used in rituals.

As you can see above, you walk near some shrine and if they throw a party, you have a chance to see such paper lanterns with Kamon on it.

It would be interesting to find various patterns of Kamon on the street and look up the meaning behind it.